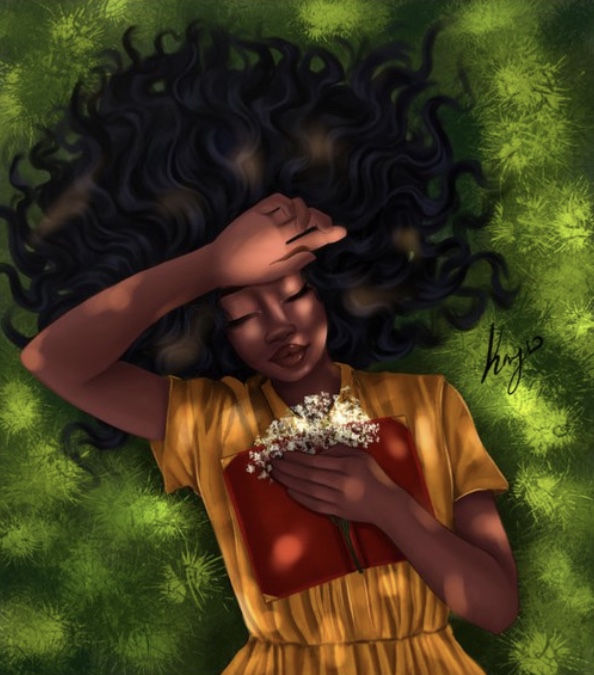 “This dress, it makes you look like a…” She hesitated.

I looked down at my dress, wondering what the problem could be. I rose my head and looked at her in confusion.

“It makes you look like a whore, like you’re trying to sell yourself to the boys.” She said self-righteously.

She looked at me, trying to guage my countenance but I kept a straight face. When I didn’t utter a word in reply, she continued,

“I don’t particularly have a problem with it, it’s just my mom. That’s what she’ll say when she sees you and I don’t want her to have the wrong impression.”

That was when the fear set in, fear for Sophie actually. I couldn’t imagine how she would let Tola control her entire life even to the tinniest detail of what her friends were allowed to wear. Maybe she felt that she had to be in Tola’s good graces every time because she thought Tola was doing her a favor by treating her like her own, but even that didn’t make sense.

Like what was Tola’s business with my choice of clothing? Was I showcasing her nipples? Or was she scared that I would seduce her son and destroy his life? I was very confused.

“I don’t understand, what’s your mother’s business with my dress?” I asked Sophie.

“I’m only telling you what she’d say and think. She already likes you, I’m not sure you want her to start having doubts.” She said.

“Oh please!” I dismissed her defense. “Your mother doesn’t like me. Didn’t she call me a soclal climber??” I probed.

“Who told you that?” She asked.

“There’s no need to pretend abeg. Your mother doesn’t like me and I know it! In fact, she’s doing a terrible job at hiding it.”

“It’s not like that. She just doesn’t want anybody to use me. She’s only looking out for me.” She defended Tola.

Apparently the seed of doubt I planted had magically being uprooted. How? I don’t know!

“Looking out for you ke? I doubt it o! She’s looking out for herself biko. I’ve told you, there’s something suspicious about her.” I tried to replant it.

“Can you not start again?” Sophie rolled her eyes.

“I’m serious. My instinct keeps telling me she has something up her sleeve and…”

“Stop, stop, stop.” Sophie held her hand up in the air, irritation written on her face.

I knew I had struck the wrong chord.

“Look Naya, you’re my friend and I really like you. But the fact that I have given you a free hand here doesn’t give you the right to talk badly about my mother. In the first place, this is her house. If she was such a terrible person, you think you’d be living here?”

“I don’t care what you’re saying. She’s my mother and for that reason, you will show her respect, irrespective of what you think. I will not tolerate any slander of her person.” She said sternly, nearly raising her voice.

Na wa o, small play, she was already acting drama. I mean I wasn’t even slandering the woman, I was only talking based on what I had heard. Which one was this shalaye for?

She looked at me with a frown and didn’t utter a word.

“I’m sorry now. I was talking in your best interest o, shey you know? I’d never intentionally disrespect your mother. Everything I said were foolish speculations, based on all the useless Nollywood movies I’ve been watching. Ewela iwe o, don’t be angry.” I feigned remorse.

Sophie hesitated and I shook her playfully.

“Forgive me now, it won’t happen again, I promise.”

Her frown was inverting when we heard a knock on the door. We looked at the door and it opened almost immediately. Of course it had to be Lade, too rude to wait for the owner of the room to permit him to come in. Mschewwww.

He took a glance at me and his eyes fell on my breasts before he had the chance to come back to his senses. Such a shameless human. He was still lusting after me and couldn’t even manage to hide it, typical male.

“Aren’t you ready?” He addressed Sophie.

“We are, Naya was just going to change into something else before we came to get you.” Sophie looked at me knowingly.

I knew that look was an express instruction for me to second her and also change my dress without putting up a fight. Just imagine, after forming bad bitch who couldn’t care less about what the guys thought, I now had to eat my words to stay in another woman’s good graces. Tufiakwa!

Again, blame it on poverty and my father. Because if he had money like Babatunde, will anybody be doing me anyhow like this? Talamabout her mother let me stay in her house. And so? Is she the first woman to have a house? Did she know that if I wanted, I could have gotten Babatunde to get me my own place?

“Nwee ndidi, ọ bụ obele oge.” I said to myself.

“Yes, I was just going to change. Please wait for us, we’d be out in a minute.” I said to Demilade.

“Okay, hurry up! I’ll be downstairs. ” He left the room and shut the door.

Without saying a word to me, she went to my box and after rummaging through it, she pulled out a playsuit with a front zipper and a bra.

“There you go.” She handed them to me. “Change quickly and let’s go.” She instructed.

I took them from her, thankful that what she chose still looked good.

I took off the dress I was wearing, sad that my plan to seduce had scattered. But while I changed into the playsuit, I remembered that I was an Anambra woman. Nobody or anything could stop me from doing what I wanted to do. So if I planned to seduce someone that night, I was going to, even if I was dressed like a nun.

In about five minutes, I was ready and we were set to go.

Sophie and I made small talk as we walked out of the room and descended the stairs. We met Tola sitting in the living room with Demilade.

“Can we go now?” Demilade asked impatiently as Tola looked at us.

I avoided eye contact with Tola but the corner of my eye, I could see her sizing me with her eyes.

“Mummy, how do we look?” Sophie gave her mother a twil.

“You look amazing sweetie, as always.” Tola smiled at her.

I saw what she did there, the bloody pretender!

Sophie must have noticed too and she quickly replied,

“I picked Naya’s outfit, does she look good too?”

I didn’t understand why Sophie was desperate to get her approval.

“Yeah, she looks good.” Tola tried to fake a smile.

“Keep your hypocrisy for your generation jare.” I said to myself as I faked a smile too.

Who needed her compliment anyway?

We walked out of the house as Tola bid her children farewell.

“Have fun, make sure Fowi is okay before you come home o.” She called after us.

Somebody hearing her now will think Fowi did surgery on his spinal cord, shior.

As we drove to Fowi’s, all I could think of was having a good time, far away from Tola and her wahala. I was also grateful that the Sophie episode didn’t escalate into something bigger.

I had had my fair share of drama that day but little did I know that it was far from over.

80 Comments on The Lagos Side Chick- S3E7