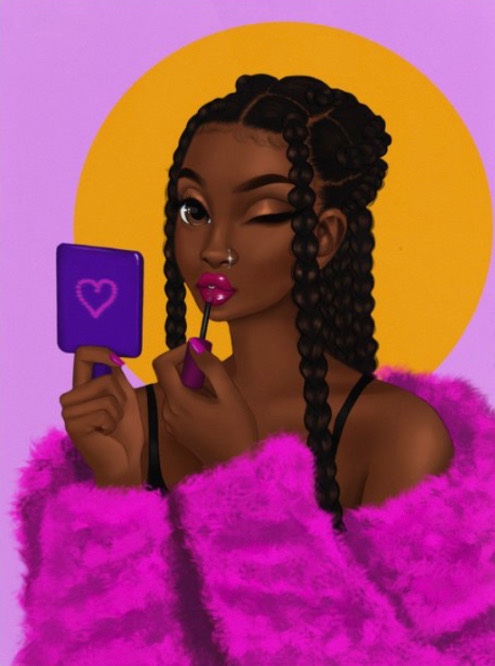 The gates of Fowi’s house flung open almost immediately Lade honked. As Demilade drove in, I unzipper the zipped of my playsuit, enough to display just the right amount of cleavage.

After parking behind the Lexus, we alighted from the car. The gate man greeted us and went back to his duty post as we made our way to the entrance door. Sophie rang the bell and Fowi opened the door almost immediately.

“This one you were standing behind the door waiting for us, were you missing us already?” Sophie teased him.

Fowi laughed hugged Sophie before explaining that he was sitting in the foyer talking to someone on the phone so he had seen us drive in. He then shook hands with Lade and proceeded to kiss me on the cheek.

“How are you? Do you feel better?” I asked him as I touched his forehead lightly.

Of course Demilade didn’t disappoint, he looked at me with rage in his eyes but I paid him no mind. I felt up the rest of Fowi’s face and neck, trying to determine his temperature. Fowi laughed lightly and said,

“I’m fine really. It was just a small headache.”

Fowi took a second look at me, properly this time and complimented much to Lade’s disdain,

“You look amazing!” He said.

I blushed and muttered a thank you as we started marching to the living room. Sophie first, Demilade second then Fowi and I, hand in hand followed behind.

“Well thank God you feel better, because now you can make us dinner. I’m starving” Sophie said as she slumped in a chair.

I sat on the couch and Fowi sat on the arm rest beside me. I rested my arm on his thigh and said,

“Haba Sophie, the man is just recovering. How do you want him to jump into the kitchen and start cooking?”

“Please abeg, you’re beginning to sound like my mum. It was just a headache and the boy said he’s fine.”

“We can just order take out like we agreed, nobody has to cook.” Demilade suggested.

“I agree, I am in no mood to cook, headache or not.” Fowi chuckled.

“Fine then, maybe pizza or something.” Sophie said.

“I’ll make the order.” Fowi said as he proceeded to call the pizza place.

When he was done, he asked us if we wanted anything to drink. Sophie wanted white wine and I didn’t mind that so we both had wine while the guys drank whiskey.

“So what do you guys want to do?” Fowi asked us.

I didn’t say a word because I wasn’t sure what rich kids did when they gathered together. In my neighborhood in Lagos, time with friends meant gisting about the men who had stopped you on the road to toast you or lamenting about the bus conductor who owed you change or better still, the suffering heat and traffic made you endure that day. All the topics of discussion I knew were too ratchet and they definitely wouldn’t be able to relate.

“We can just watch TV o, or play a game.” Sophie suggested.

“Let’s play a game. Everything on TV these days is depressing.” Demilade said.

Fowi suggested that we play never have I ever and everyone agreed with him.

“But hold on, everyone needs to be drinking the same thing. Some people cannot be drinking water while others are drinking alcohol.” He looked at Sophie and I knowingly.

Before Sophie and I could protest, Fowi jumped up and went to get two more whiskey glasses.

“Na wa o, somebody cannot even drink what they like in peace.” Sophie gave Lade a side eye.

He poured some whiskey into our glasses and handed it to us before sitting down again.

So he went first.

“Never have I ever kissed on the first date.”

I had done this one before, a few times sef but the one that came to mind was the night with Lade. There and then, memories rushed back like the wind. That night marked the beginning of the life I was living now.

So while Demilade and Sophie laughed and drank, I smiled shyly and drank from my glass. I looked at Demilade who was laughing too, I doubt he remembered that night because he didn’t even look in my direction.

“All of you are so cheap, how can you kiss on the first date?” Fowi asked.

“I couldn’t resist,” Sophie laughed. “It was this guy I went on a date with in Madrid, off Tinder. He was super hot and I was wasted. We went third base that night.”

“What?!” Lade screamed. “How have I never heard this gist? And they say I’m the bad one.”

“You’re the bad one joor.” Fowi said. “Every single boys trip, from Rome, to Bali, to Ibiza, name it! You always ended up with a new girl every other night!” He revealed.

I couldn’t help laughing. She sounded so weird trying to sound like a Yoruba woman.

“Those were my hay days jare, I’m a changed man now.” Demilade tried to defend himself as Fowi and Sophie laughed at him.

“Indeed.” I thought to myself.

Changed man that is still looking at my breasts and trying to get with me every other day, if only they knew.

“You haven’t said much Naya. Or are you trying to make us forget that you drank too?”

“Absolutely not.” I said.

“So tell us about yours.” Sophie urged.

Everyone stopped laughing and all eyes were one me, Demilade’s piercing deeper.

“It’s not that serious really. This guy gave me a lift to the club I was going to. Coincidentally, he was heading there too. So we hung out throughout the night, one thing led to the another and we kissed.” I stared back at Demilade.

“Ehen, what happened next? Did you end up riding his dick?” Sophie inquired.

“Sophie!” I was shocked.

Fowi burst into laughter and Lade tried to change the conversation.

“Can we continue the game?”

“Chill now, she’s not done with her story.” Sophie stopped him.

“Oh I’m done, the guy was a dickhead and a complete waste of my time.” I said.

“Me neither.” Fowi concurred.

There were five seconds of awkward silence before Sophie asked Demilade to go next.

“Okay,” he said as he sat at edge of the chair. “Never have I ever had sex on a plane before.” He looked from Sophie to Fowi like he knew something.

“You had to do me dirty!” Fowi shook his head as he drank his whiskey.

Sophie looked around for a bit and didn’t drink from her glass.

“My friend will you drink up!” Demilade fake-scolded.

“Na wa o. Somebody cannot even confide in you.” Sophie drank.

Of course I did not drink. How many times have I entered plane before? For how many hours? The few times I had travelled by air was within Nigeria, once from Lagos to Port Harcourt and two round trips from Lagos to Abuja, that’s all! Is it in the one hour flight or in the cramped seat I want to be having sex? With who? As how? Is it magic?

Was he trying to disgrace me abi what? Lee m hụ nsogbu! If I didn’t drink, didn’t it mean that I had never done it? Why did he now have to ask me specifically? This boy was looking for my trouble again and he was going to get it.

I was preparing to give him my answer when Sophie replied him,

“Duh! If she didn’t drink, doesn’t that mean she hasn’t done it? Leave her abeg.” Sophie chided him. “Fowi, I’m interested in your plane sexcapade o, tell us how it happened.”

I was interested too so I sat at the edge of my chair ready for gist.

“It was two years ago I think, Abi and I were still dating then. We were going to Mykonos for Goke and Rene’s wedding, with Lade, Boye, Obinna, Rems and like two other people I can’t remember now. Everyone was sleeping…”

“Except me.” Lade interrupted.

“They kept me awake with their moans and grunts, I was so pissed.” Laded added.

God eh! Again, I could hear the money speaking. Private jet, luxury weddings and vacations, ajebo girlfriend, heii Jesus! I could not relate to any of that. Like even if I wanted to fake it sef, where will I begin?

“Mine was on our way to London from Paris last year.” Sophie paused. “With Catherine’s brother.”

The boys looked a little shocked and I figured that Sophie had just dropped a bomb. There must be a back story with this Catherine person for them to be shocked like that.

“You didn’t tell me this part o.” Lade was surprised. “Isn’t Catherine one of your closest friends?”

“I thought you weren’t allowed to mess with your friend’s sibling? Abi am I wrong?” Fowi asked.

“I thought so too. Apparently, that’s a rule for only the boys.” Lade said.

“A girl has to live abeg.” Sophie laughed lightly.

“Amen to that!” Fowi rose his glass and drank from it.

If someone had told me before that Sophie was this wild, I’d never have believed. I mean I thought I was the bad bitch but now I wasn’t not too sure. From Uncle Rex, to one night stand to fucking her friend’s brother. Ah!

Fowi must have noticed that I was lost in the conversation so he suggested that we change the game.

“Yeah, this one is making me expose my secrets to y’all. Let’s stop before it gets out of hand.” Sophie concurred.

“So what should we play next?” Lade asked.

Fowi suggested truth or dare and we agreed with him, even though I had my doubts. I wasn’t sure how it was going to work. Were they going to dare Sophie to kiss Fowi or make me show Lade my tits? How would it be interesting considering the fact that they were more like siblings? I was going to find out.

“As usual.” Lade rolled his eyes.

“Next time suggest a game so you can start.” Fowi said.

“How is this going?” Sophie asked.

Fowi gave me the two options and I wasn’t sure what to pick. I didn’t want to be dared to do a stupid thing neither did I want to be asked a scandalous question. So I decided to pick the lesser of the two evils, truth. After all, who will know if I lied?

“Okay.” Fowi took a deep breath. “Are you ready for my question?”

I answered in the affirmative and he proceeded to ask a question that shocked everyone and left me speechless.

40 Comments on The Lagos Side Chick- S3E8