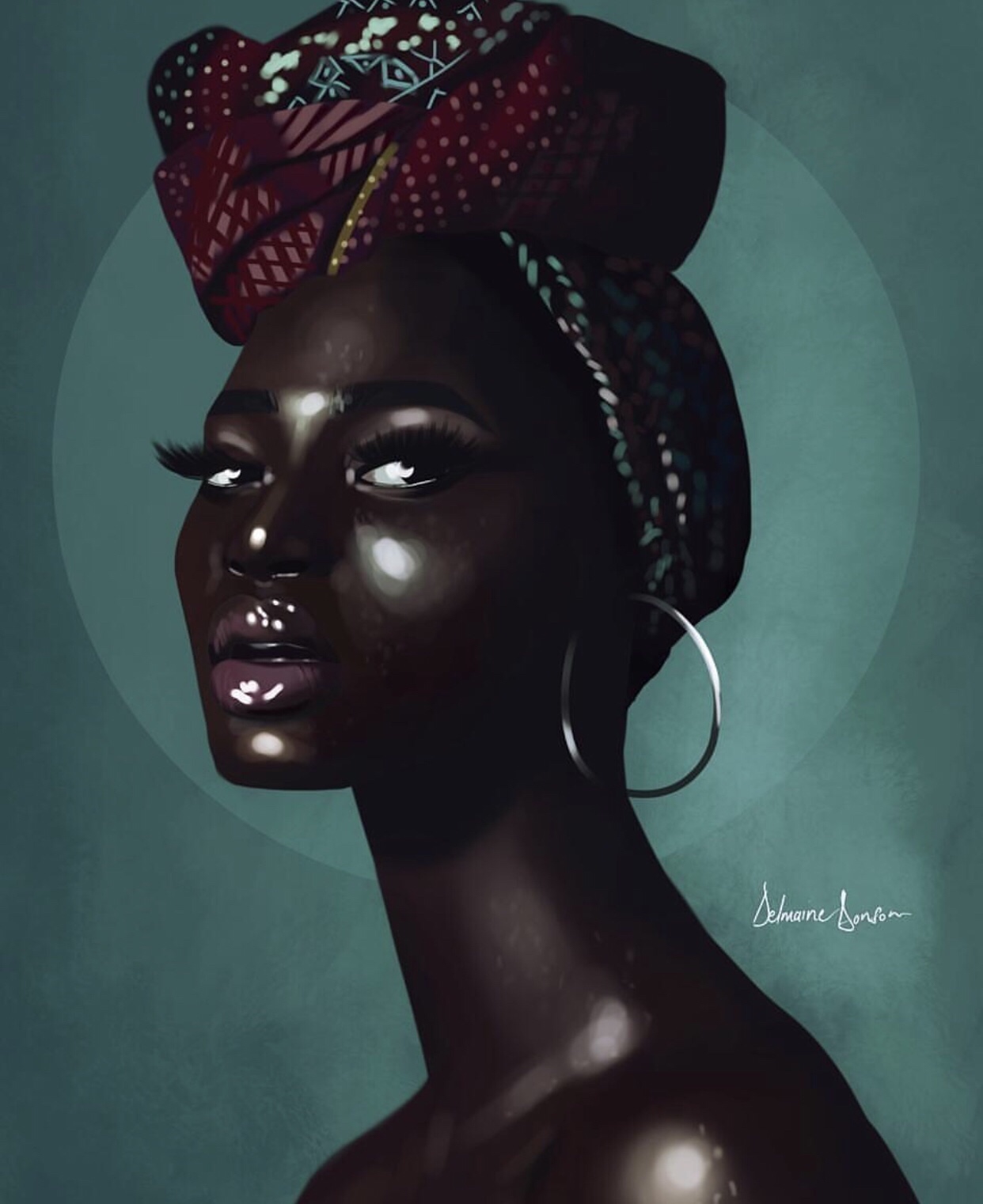 “It was nothing serious sir. She was just angry at what I was saying to her.” Fayo replied.

“Yes sir.” Onome and I chorused.

Badmus started long and hard at us and said,

“If all of you are not going to say the truth, I’d call an eye witness and ask. It won’t be funny when I find out the whole truth.”
“But sir…” I tried to speak up before Badmus cut me short.

“No buts Teniola. I want the truth right now or you won’t like it at all.”

Wow. He didn’t call me Tee or baby or boo. He called me Teniola. He must have been really upset. We were still weighing all our options when out of the blues Onome spoke up.

My heart jumped into my mouth. Onome was not about to betray us like that. I know we are not exactly friends, but there’s a girl code that states, “Sis before bros”. She was supposed to have our back, or not?

“I slapped her because she accused me of sleeping my way through my promotion.”

Boom! She had dropped the bomb. Fayo and I looked at her in horror. Onome was just a black witch sent from hell to destroy the earth.

“Did you sleep your way through your promotion?” Badmus asked her.

What kind of foolish question was that? Something that all of is there knew the answer to, he was still asking her about it. Badmus was surprising me every passing second.

“Fayokunmi, where did you get that idea from? Do you have proof to back up your claim?”

Fayo was more stunned than I was. It was as if it was an open challenge. You know when everybody knows that you’re lying but you are still a bad guy and you stand your ground? That’s exactly what was happening. He didn’t even look or sound shocked when he was talking. He looked Fayo in the eye, same way an innocent man would.

I nudged Fayo not to answer him. Because knowing Fayo, she would drag him for making her look like a liar. She would probably have told him his own history with Onome and I but she kept quiet and stared long and hard.

“I’m talking to you Fayo. What gave you that idea?” He repeated.

“Nothing sir. I just said it in anger. Because I knew my friend here deserved the promotion more than Onome did. So I put two and two together. I guess I was wrong.”

“Fayokunmi, promoting Miss Onome was a management decision. You have no right to counter it physically or in your mind. She definitely couldn’t have slept with every executive. She was obviously promoted because she was better qualified than Teniola.” He said.

I turned to see Onome beaming foolishly. Badmus was humiliating me in front of Onome of all people. Imagine. There and then, I decided to deal with him too. I knew his type. Malign you outside and come inside to beg you. But I wasn’t going to let that happen. He was going to pay.

“Very good then. You three are a few of our most competent staff. So it’s a big shame that you all had to be involved in this. Especially you Onome.”

“You are the head of a department not just an ordinary staff or intern. It speaks badly of you to turn an office that has been placed under your care into a boxing ring. You shouldn’t have slapped Fayo, no matter how angry you were. What happened to taking the higher road?”

“But she was the one who came to my office to look for my trouble.”

“But you indulged her. Didn’t you?”

There was no reply.

“I’m guessing that is a yes. Even if she came to fight you, you could have called security. But no, you happily joined in the insulting and eventually fought. This is the last time I am going to condone such behavior. The next time this happens, you will face a panel with suspension and possible demotion as the most likely tendency. Is that clear?”

“Good. Teniola.” He called my name.

I was boiling inside me so I didn’t answer. I just rose my head and looked straight into his eyes.

“All this wouldn’t have happened if you were not rude to your boss.”

“You answered your phone when she was talking to you. That isn’t rude?” He asked me.

I couldn’t believe it. I was now the one to blame? Since we are passing blames, why didn’t he blame himself for calling me when he knew I was supposed to be working. Why was everything now my fault because I picked my phone?

“You shouldn’t be apologizing to me, but to your boss.” He replied.

“You are my boss.” He surely couldn’t have been implying that I apologize to Onome.

“You should be apologizing to Onome.” He said.

As if all the humiliation was not enough, he was going to make me apologize to Onome? Olorun maje!

For peace to reign in the mean time, I turned to Onome and apologized.

“I’m sorry.” She looked at me with a smile of victory on her lips. I felt like slapping the smile off her face.

“Good. Next time when your boss is talking to you, please ignore your phone. So we don’t have an episode like this repeating itself. Is that clear?”

Then he faced Fayo and said,

“Fayokunmi, you shouldn’t be walking from pillar to post like you’re jobless. You left your office and came down three floors to fight. That’s very disgraceful.”

There was a minute silence before oversabi Onome spoke up.

“I’m sorry about my behavior sir. I promise it won’t repeat itself.”

“I’m letting this go quietly because you all are valuable assets to the company. But if this repeats itself, I won’t take it lying low. Is that clear?”

Fayo and I walked out but Onome stayed behind. I wondered what she was staying back to say.

As we opened the door, Badmus’ secretary jumped back. She had obviously been standing by the door and listening the whole time.

“How long have you been standing there for?” Fayo asked her.

“Long enough to know that you are a busy body looking for where to start a fight.” She mocked.

“If not for God ehn, I would have beaten you to a pulp now. Go and ask Onome.” Fayo replied her.

“Beat now. You will lose your job today. Anuofia.” She hissed and went back to her seat.

She was hesitant and refused to move from the spot till I dragged her along with me.

Once we were out the door, Fayo exploded.

“Just imagine that man. Look at how he spoke to us in front of Onome. The insult and the injury was too much. I wanted to slap his mouth shut.”

“If you’re this furious, imagine how I feel. After giving him from all angles, he still had the guts to treat me like this, with spite, in front of Onome.”

“Teniola, this is too much to take sitting down. You need to go back in there and show him how angry you are. He cannot eat his cake and have it. Kolewerk.”

“Leave that one first. You that came to cause wahala nko? You know it’s your fault all this started abi? To now make matters worse, you went to announce to everybody that she was sleeping around. Haba now.”

“Abeg abeg abeg. She pushed me. I probably wouldn’t have said anything if she wasn’t running her mouth and insulting everyone. Even you sef, didn’t you flip? Don’t blame me abeg.”

“See forget all these ones now, go in there and give him a piece of your mind. Na you get bottom power. He will listen to you.”

“First day of resumption and I am already in trouble again.” I murmured.

Taking a deep breath, I matched back into the office. I ignored the angry voice of the secretary who was trying to prevent me from going in.

Flinging his door open, I said,

“Excuse me sir. I would like to talk to you.”

“Teniola, I’m talking to your boss.”

Onome stood there confidently. She must have thought that Badmus was going to make me leave and keep talking to her. I silently prayed that that wouldn’t be the case. If it was, I would be done for.

As God would have it, he asked Onome to leave.

“Excuse me?!” She looked at my smiling face in horror.

“I said we would continue this discussion later. You can go back to work.”

She took one last look at both of us and marched out.

When I was sure she was gone, I turned back to Badmus.

“What was the meaning of that?”

“Are you being serious right now?”

“Tee I don’t understand what you are saying.”

“Don’t Tee me anything. After humiliating me in front of everyone, you think it’s ok to come back and act like nothing happened?”

“But babe, I expect you to understand.”

“Understand what? The fact that I was the scapegoat for you and Onome to drag round? Badmus it was because you called me all of this started.”

“Well if Onome was talking to you, you shouldn’t have picked up.”

“That’s not what I am saying.”

“You didn’t have to say it. It’s obvious. Teniola Ayorinde, the witch from the west, set the office on fire this morning.”

“Don’t say that babe. I couldn’t not chastise you in front of everyone. People would start to suspect.”

“Oh please. Did anyone suspect you and Onome?”

“Ohhh. You think I don’t know that you have been sleeping with Onome? That you paid for her house in Ikoyi? Got her a car? Even gave her my promotion. I know everything Badmus.”

“Who is feeding you with all these things?”

“That’s not the point! I didn’t object to you sleeping with both of us because it was not in my place. I mean, you can do what you like with yourself and your money. But what I would not take is you humiliating me to please her. I will not take it!”

“But you put the blame on me. You even said she was better qualified than me. We both know that’s a lie. But you chose to say it, to humiliate me.”

“Simple. You have to pick between Onome and I. If you pick Onome, she retains her position. If you pick me, Onome gets demoted and I become head of HR. Deal?”

“Badmus, you can’t have the best of both worlds. You need to make a choice.”

Badmus stood up, walked to me and held me.

“Babe. You know I would pick you any day, anytime. I can give you everything you need and want. Money, cars, houses, the good life. But getting Onome demoted is not going to be easy.”

“You need to prove that you actually want me like you claim. Get her demoted.” I insisted.

I had put him between the devil and the deep blue sea. I was tired of playing second fiddle to Onome and it had to stop.

Just as I was waiting for Badmus to decide, an unexpected visitor walked in.