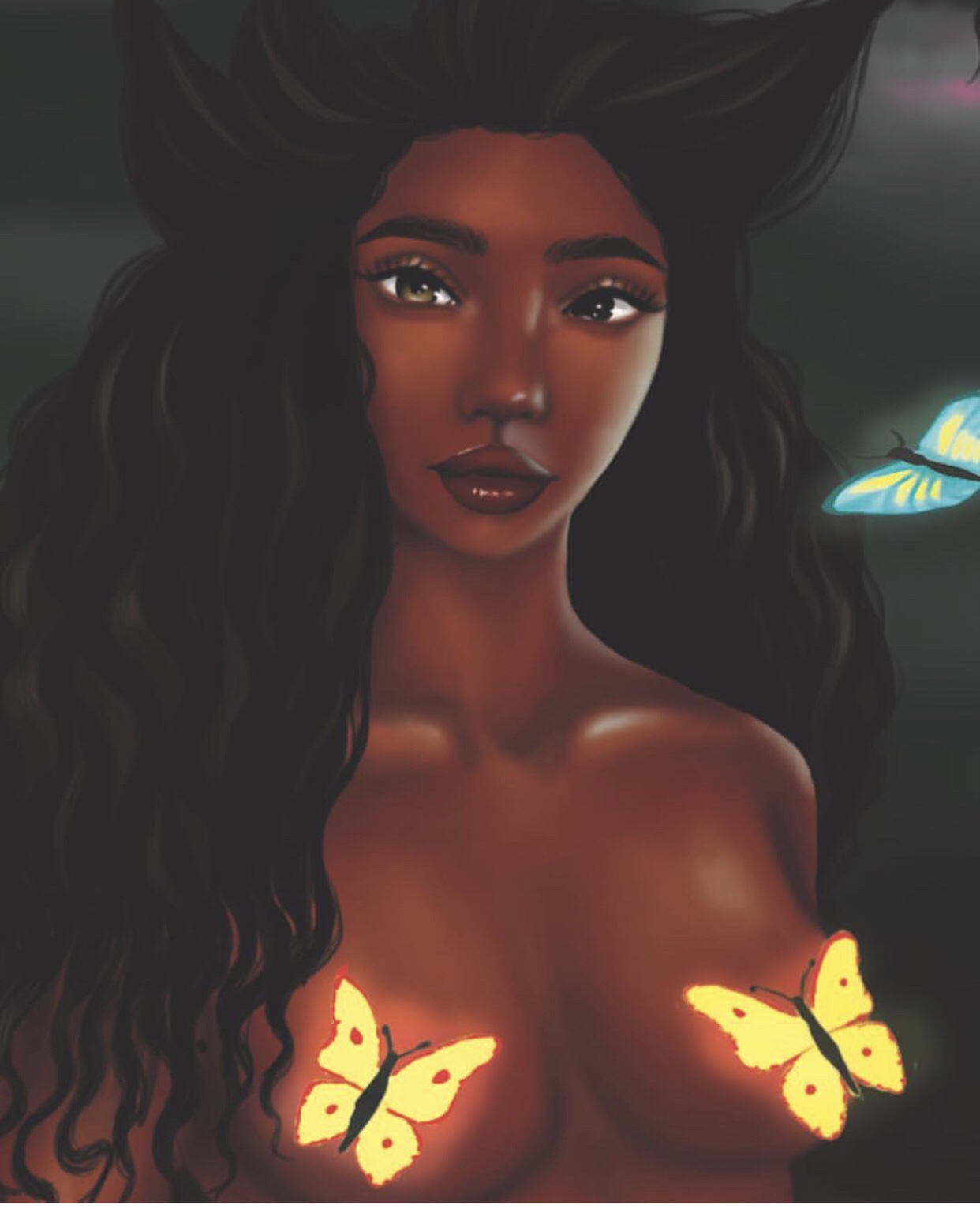 I heard the door make a sound, like someone was trying to open it. The handle moved up and down continuously for a few seconds. I turned to Lade and saw confusion written all over his face.

“Who could…” He was asking before I quickly covered his mouth.

He got the drift and kept quiet. I crawled out of the bed, tip toed to the door and put my ear on it hoping to hear something, anything. Demilade kept stretching his neck to find out what was happening. He even wanted to come and hear for himself but I gestured to him to stay calm and when he was about to protest, I angrily put a finger on my lips to instruct him to be quiet.

“Naya, Naya.” Sophie called as she started knocking continuously on my door.

Ghen ghen! I ran back towards the bed and dragged Lade out of the bed. He quickly wore his boxers and put his tie around his neck, as I gathered the rest of his clothes. I handed them to him and started looking for a place to hide him, I tried to fit him into the wardrobe, but it wasn’t convenient for him so I told him to lie under the bed. After protesting for almost one minute, he finally agreed, seeing as there was no other option.

I quickly picked up my robe, draped it over my shoulder and walked to the door, while trying to hold my robe in place.

I opened the door slightly and stuck my head out.

“When did you start locking your door?” She said, completely ignoring my first statement.

“Since the men who work for you started coming into my room without knocking.” I lied.

“Ok, have you seen…” she stopped when she noticed the way I was holding the door. “Why are you standing at the door and holding on to it so seriously?” She asked.

“Nothing.” I said, but I failed to convince her that all was well.

“Move out of the door way let me come in then.” She tried to push me back, but I stood my ground.

“And that is now an excuse not to let me in?” She asked me.

“I thought you were looking for something.” I tried to distract her.

This girl legit ignored me and started pushing the door. Me too, I was pushing it back. This is the kind of thing that happens when you’re squatting in somebody’s house. They will now think that they have the right to just invade your personal space because it’s their house, mscheww.

After struggling for about one minute and almost falling to the ground because of her heels, Sophie finally won the battle and gained access to my room. Immediately she entered, aunty started looking round as if she misplaced her property. She walked round the room and I followed her bumper to bumper. She turned back and looked at me suspiciously. My own prayer was that she would do quick and carry her wahala and go.

After looking round and finding nothing, she finally said what her problem was.

“Have you seen my brother?” She asked.

“Seen your brother?” I asked back.

“Why are you repeating after me?”

“I was just trying to be sure that was what you asked.” I said.

“You’re up to something fishy this morning. I don’t know what it is, but I’m going to find out. In the mean time, I need to find my brother. Have you seen him anywhere?”

“Even if I have seen him somewhere, how will I know he’s your brother? I’ve kuku not seen him anywhere before. Besides, I haven’t left my room this morning so I couldn’t have seen him.” I said.

This girl now went to sit on my bed, at the exact same corner Demilade’s head was. I don’t know how, but the edge of his tie was shooting out from underneath the bed and Sophie stepped on it with her heels and that’s how aunty refused to remove leg o. She now started asking me mumu questions about my robe and where I bought it.

I think Demilade must have tried to move and the tie choked him because he made a small whimpering sound.

“What was that sound?” Sophie asked.

I knew that I had to make Sophie leave my room at that instant before the poor boy will die of strangulation. I could already see the death featured on 1000 ways to die. Well sha, if it got to that extent, I would have put Nigeria on the global map because that would be the first Nigerian death that’ll be featured on the show.

I gave my head a small slap and brought myself back to my senses. I went to where Sophie was sitting and pulled her up.

“Your brother is not here Sophie, you should go and look for him in the other rooms. Maybe he’s just taking a walk round the house.” I dragged her to the door.

“Why are you forcing me out?” She was adamant to move.

“Because I need to take a shower and get ready for the day. Do you want your father thinking that I’m a lazy person who sleeps all day?” I had already succeeded in opening the door and pushing her out.

Before she had the chance to say another word, I shut the door and locked it. Demilade crawled out from underneath the bed holding his neck and wincing in pain. I went to him and tried to help him massage his neck but he rebuffed me. I just looked at him and hissed in my mind. See somebody I was trying to help, he was raising shoulder for me. I would have let Sophie sit there for hours and even offer her refreshment, nonsense.

He threw his clothes to the ground because they had been dirtied by all the dust under the bed. I didn’t say a word to him before he would form pride for me again. I wasn’t going to render help that I wasn’t asked for. I went to my bedside, sat down on the bed and started going through my phone. After standing in the middle of the room for one minute, he finally spoke.

“What are we going to do now? Look at my…” He was saying.

“Is there any other person here?” He asked sarcastically.

“I was double checking, because you can’t be talking about me and you as we. A few minutes ago I was trying to soothe your sore neck and you rebuffed me. Now you want me to help you? No my darling, you’re on your own.”

“How about I go to my meeting like this? I bet my father and sister will be glad to find out how you lured me to your bed and how you almost let my sister break my neck because you were hiding your atrocities.” He said.

“Uncle, it takes two to tango. So if I go down, you’re coming with me.” I assured him.

“It’s going to be your word against mine and I’m sure you don’t need me tell who they would believe.” He smiled.

Wait, wait, cheap blackmail was my thing, not Demilade’s. I was supposed to be the blackmailer not him, that was the purpose of this sex in the first place. It finally dawned on me, he had beat me at my own game and now I had no choice than to help him, before his father that kuku didn’t like me sent me out of his house.

I told him to wear his shirt and he refused, saying that the shirt was too dirty for him to put on his body.

“My friend wear the shirt joor. Abi do you have a better idea on how we can get you out of here?” I asked.

He looked at me, sighed and wore the shirt. His facial expression didn’t fail to show how irritated he was while wearing it. I handed him the jacket and pants and told him to wear it too. After he had worn it, I went into the bathroom, wet a towel and came back into the room. I wiped the dirt off his jacket and pants and soon, it was almost clean.

“Now all you have to do is, walk out of here as calmly as possible, go to your room, take a shower, wear a clean set of clothes and you’re good to go.” I said.

“Ok then. Please can you go and check is someone is on the corridor? He gestured to the door.

“Sure.” I walked to the door and opened it.

I stepped out of the room and left the door open. After looking left and right and making sure the coast was clear, I signaled him to come out. He picked up his shoes and tiptoed out of my room. His room wasn’t far off so I waited on the corridor till he had gone into his room.

Immediately after he shut his door, I made to walk back into my room when Sophie called my name. I almost jumped out of fright. I turned to look in the direction I heard her voice and saw her hurrying to me. She reached me, pushed me inside the room and entered too.

“Why are you walking around like this?” She gestured to my transparent robe. “What if my father or brother had seen you?” She asked.

I heaved a sigh of relief, happy to know that she had not seen Demilade and I on the corridor.

“Ermm… I wanted to call one of the maids.” I quickly said.

“The maid? What happened to the intercom in your room?” She queried.

“You forgot?” She looked at me suspiciously.

“Yes I forgot.” I looked away.

“This is the second strange thing you’re doing today and I wonder what’s happening.”

“Anyway, please get ready quickly so we can go to the office. There’s a meeting we need to be at.”

“What kind of question is that? Are you not a member of staff? Abeg hurry up and dress up so we can go. Let me go and continue looking for my brother. I still haven’t found him.” She walked out.

I took a quick shower and was done dressing up in about thirty minutes. When I was done, I went to Sophie’s room to see that she was already set to go. She informed me that her father and brother had already left and the driver was waiting to take us to the company.

We went downstairs, downed a cup of tea each and hurried to the waiting car. We finally arrived the office in less than twenty minutes and went to join everyone for the meeting, a meeting that did nothing but complicate things further.