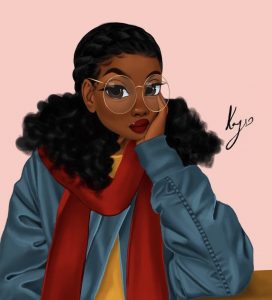 I was standing in front of my room door and preventing him from entering. I looked at him from head to toe with mockery in my eyes.

“You want to finally throw my things out?” I asked him.

“Oh please, of what use would that be? I just want to talk.”

“Talk about what? I have absolutely nothing to say to you.” I walked into the room and he followed me behind.

“Well I have a lot of things to say to you.” He replied.

“Before you start saying whatever you want to say, please shut the door. It would be such a shame if you end up washing all your dirty linens in public.” I pointed at the door.

He walked back and did more than shutting the door, he locked it.

“I’ll be happier when you leave my room.” I smiled back.

“What are you doing with Fowi?” He asked, completely ignoring my previous statement.

“Playing snakes and ladders.” I answered.

“I’m not joking with you.” He said angrily.

“Do I look like a clown to you?” I hissed and sat on the bed.

“Listen, you cannot have anything to do with Fowi. He’s my friend for Christ sake.”

“And so what?” I stood up. “So because he is your friend now, nobody should associate with him? People should touch him with a long pole abi what?”

“Stop playing dumb with me. We had a thing and you cannot go on to date my friend.”

“You are definitely joking right now.” He laughed again. “Nooo, you have to be joking.”

I kept a straight face and didn’t say a word. He looked up and when he noticed that I wasn’t laughing, he stopped laughing.

“Listen to me, you cannot have anything to do with Fowi, he’s my friend for the love of God. You cannot leave me for him.”

“We just had sex this morning for crying out loud.”

“So because we had ordinary sex now, you think that something is happening between us?”

“We were together before today and…”

“We were never together Demilade, we had random sex and you were the one who said you weren’t interested in going any further. So why are you now raving and ranting like a mad dog?”

“Come sef, shebi you said you have girlfriend abi is it fiancée? Ehen, go and face her now, what is your business with what I am doing with Fowi?”

“Leave Christine out of this.” He shouted. “Please, I beg you in the name of God, leave Fowi alone, please.” He continued.

“Ok, I will leave him alone when you explain to me what is peppering your body about our relationship. I shouldn’t have anything to do with anybody again because I made out with you once and had sex with you twice, abi?”

“I don’t care who you have something with, just don’t let it be my friend.” He shouted.

There was silence in the room as Lade paced up and down.

“Listen Naya,” he walked up to me. “You know that I really like you right? Why would you want to be with Fowi when you can have me? What does he have that I don’t have? You can’t leave me for him, you just cannot.”

“You’re such a chauvinistic bastard. So I’m only good enough to be a side chick abi? I’m not..”

“That’s not what I’m saying Naya. Ok, if you don’t want to be with me it’s fine, you can find another man, just not Fowi, please.”

“Ehen now, what else again?” I asked him as I sat on the bed.

“Nothing, I just didn’t think you would agree so easily.”

Lade smiled at me.

“Yes you are,” he sat beside me. “And that’s one of the things I love about you.” He moved closer.

See mumu o, because I had told him yes now, he thought he could take advantage of the situation. I knew he wanted to get into my pants but I wasn’t going to give him the pleasure.

“I see, what else do you love?” I looked into his eyes seductively.

“Your spontaneity, your energy, your passion,” he held my face and kissed me.

I kissed him back for a while and gently pushed him away.

“You haven’t finished telling me what you like.” I smiled as I undid one button on my blouse.

“Your awesome awesome breasts.” He smiled mischievously and made to touch them.

He squeezed them and made to unbutton the rest of the buttons on my blouse. After he had succeeded, he made to unhook my bra as I stroked his growing cock. He put his lips on one of my nipples and started to suck on it, while flickering the other one in between his fingers. I let out soft moans of pleasure. He kissed my nipple and said,

“Look how happy I make you,” he kissed again. “Can Fowi make you feel like this?” He kissed again. “Does he make you orgasm like I do?” He made to kiss again but stopped when he heard my hysterical laughter. He rose his head and looked at me in confusion.

“Did I say something funny?” He asked me.

“No, well yes. It’s hilarious that you think you make me orgasm.” I laughed harder.

“I’m sorry?” He said, refusing to believe what I had just said.

“Listen honey, your sex game is the worst, like the worst ever. I wonder how your girlfriend is coping sef.”

I watched as his cock deflated in his pants. He looked at me in anger.

“Oh, wait o, do you think you are a stallion? As in your head you can take a woman to the moon and bring her back? Abi you think it’s because I want to keep you that I agreed to leave Fowi?” I clapped my hands and laughed.

“So why did you agree to leave him then?” He looked at me desperately.

I didn’t have an answer to that question because I definitely wasn’t leaving Fowi, not for anything in the world but now more than ever, I knew that I had to punish this idiot for coming up with such a stupid request. That his father that is his idol is who I was going to make my conquest, my trophy.

“Answer me for Christ sake.” He screamed.

“Because birds of a feather flock together. If your sex game is wack, his is probably same and since I cannot deal with terrible sex, I’d rather not have anything to do with him.”

Lame excuse, I know. But what could I have said? My brain didn’t come up with any other excuses.

“So it’s all about the sex for you? That’s the only reason you get with anyone?” He sounded hurt.

“Biko did I say so? Abeg don’t put words into my mouth o. All I’m trying to say is that sex is important to me and if I’m not getting it good, then the relationship is of no use.”

Lade stood up, stared at me, walked to the door, unlocked it and opened it. Then he turned to me and said,

“You’re no different after all.” He shook his head and walked out of the room, leaving the door open.

I ran and shut it before someone had the chance to see my bare breasts.

That definitely didn’t go down well. I knew I could have done better, I mean I could have come up with something better. But at least, it felt good deflating his ego. Even though I knew all that I said about his sex game was a lie, I was glad that it hurt him badly. Next time, he will go and meet his grandmother and insult her. As for his father, I was going to make sure I made him my sugar daddy whist dating Fowi. My first point of action was to play victim in front of the man and get him to sympathize with me before proceeding to do anything further. I thought about it long and hard and finally came up with a wonderful idea.

I smiled to myself and strolled to the bathroom, who said I wasn’t a genius? Just as I was putting my plan in place, Fowi called me. We talked for a bit and he asked me if I had seen Lade since I got back home, he wanted to know if there had being a confrontation but I denied him and told him that I hadn’t seen Lade yet. After gisting for a few minutes, he finally ended the call.

When I was done taking a shower, I dressed up and walked out of my room. I walked to Sophie’s door and was about to knock when I heard some funny sounds. The curiosity in me forced me to open the door and you wouldn’t believe what my two koro koro eyes saw.