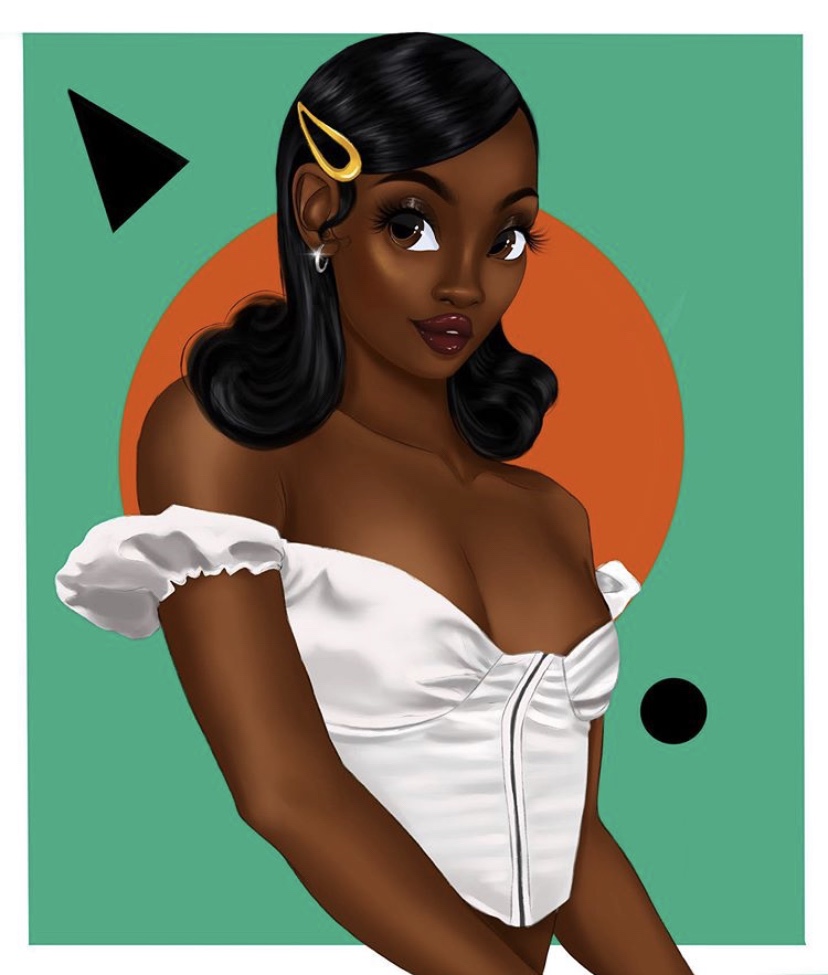 “What were you going to do just now?” I heard Tola ask.

“You wanted to eat leftover food?”

Ahan! Leftover food ke? Didn’t we just stand up to see Fowi off? How was it leftover food? Was it not the rice that we left for three minutes we were going to continue eating? Omo na wa o. Me that had said I was going to take Fowi’s chicken and eat sef, now the woman is calling it leftover.

It was as if Sophie read my mind and she told her mother exactly the same thing.

“You left your food, didn’t you?” Tola asked her.

“No buts Tolu. You want to become like your friend who goes back to continue eating when everyone has left the table?”

I knew it! I just knew! It’s because of me she was acting that whole drama. She wanted to show Sophie by all means that I was an unrefined, below her class, ghetto friend and I didn’t quite fit into their world.

A world that I was trying to enter, something that I had been hustling for for how many years, she will now use bad belle to spoil. At that moment I was so mad, I wanted to march up to her and tell her how her husband had been moaning my name like,

“Excuse me ma, do you know that I am co wife? As in, your husband is eating from my pot of soup too?”

It would have driven her crazy, but that’s the treatment people like her deserve. Such a bloody hypocrite! How can you be smiling with me, telling me that I am a good friend for your daughter, then running me down behind my back because society has put you in a higher place than me.

I blame my ancestors sha. If my grandfather had hustled hard and blown, I’d have been swimming in family wealth too. I’d probably have met Sophie in uni abroad not in any nonsense NYSC camp. Will Tola even see me to be dragging because I am eating “leftovers”? Me that will be in my mansion in Maitama, eating fresh soup and stew everyday, driving one of my father’s cars and painting Abuja red. Rubbish!

I was brought back from Lala land when I heard Tola warning abi advising Sophie not to bring herself down to my level.

“Listen, I know she’s your friend, but you need to remember that you’re not on the same level. Be careful with her, for all you know, she’s just a social climber who is trying to use you.”

Like can you imagine? Me, Ifunaya Martina Nwokedi, social climber? Wow!

I mean Tola wasn’t exactly lying o, but her tone made it sound as if I was going to hurt Sophie in the process of climbing the ladder which was a lie. I hadn’t hurt her in any way, on the contrary I had been helpful to her and her family. Given her father and her brother orgasms, thus saving them from sexual frustration and most importantly, kept her secret about her love affair with her Daddy’s age mate.

Omo, the earlier this woman understood that my presence was of importance to her and her whole family, the better because if any of them thought I was a pushover then they better think twice. My roots had started forming and there was no going back.

I was so disgusted at the conversation that I didn’t even wait to hear any further. I went back downstairs and continued eating my food. Nobody was going to bully me to die of hunger.

As I was eating, Sophie came back downstairs and sat at the table with me. I acted as if I hadn’t heard what Tola had told her. The only thing that was going through my head was revenge. What would I say that would turn Sophie against Tola? Tola was trying to pitch Sophie against me, it was only fair that I paid her back in her own coin.

Sophie sat there, staring at her almost full plate, probably deciding whether to listen to her mother and not eat the food or to do strong head and eat it.

“I doubt it. I’m not very hungry.” She answered.

“Ohh okay.” I put another morsel in my mouth.

There was awkward silence in the room for a while. The only thing I could hear was the sound of Sophie’s confusion as a result of what her mother had said about me.

“So, your mum is a really nice woman.” I said to Sophie.

“Which I find very suspicious.” I said thoughtfully.

“I don’t understand. What do you mean?”

I looked around to make sure no one was listening in. Before Tola will hear me now and throw me out of the house.

“How is it possible that her husband had a love child and she didn’t get mad at all. She just took you in like that and started showing you love?”

“And so?” Sophie blurted out, nearly screaming. “What is wrong with that? She says I’m the daughter she never had.”

“Listen, I’ve seen these things happen a lot before. Wives of cheating men are very bitter people and when they cannot exert revenge on their husband’s girlfriends or baby mamas, in your mother’s case, they take it out on their children.” I explained.

Sophie pushed back her chair noisily and stood up with aggression.

“How dare you talk about my mother like that?” She was half yelling.

I admit I didn’t think about what I hd just said properly before doing it. I just wanted revenge on Tola and I was ready to say anything to get it. I forgot to think about the most important detail, Sophie’s reaction.

“Calm down and sit down before someone hears us.” I said sternly. I had already begun the slander, so there was no going back. I only had to be more convincing to get Sophie on my side.

Sophie didn’t move to sit down so I used my eyes to signal forcefully to the chair for her to sit. It took a few seconds of doing that to get her to sit down again.

“See let me tell you, no woman will just forgive her husband for cheating on her and even worse bringing a baby home, a whole human being. Your brother’s were the only ones in Tola’s life plan, not you. You are like a destabilizer to her and I can almost swear that she has an ulterior motive. The fact that she hasn’t done anything to you yet doesn’t mean she wouldn’t. For all you know, she might have taken all this time so that you can trust her. That way, you’d never suspect her if she did something to harm you. Revenge is patient my friend, it’s a dish served cold.” I buttressed my point.

She looked at me thoughtfully. I had managed to plant a seed of doubt in her and that’s what I wanted. I wanted her to think twice every time Tola told her something, to think about the possibility of Tola trying to hurt her in someway. That way rebellion will start and it would definitely cause an imbalance in Tola’s paradise.

“This your theory doesn’t work in this case, that woman loves me, like I came out of her own womb.” Sophie said, trying to convince me.

“Ok o. If that is what she has brainwashed you with, then no wahala. You don’t have to believe what I just said, my theory is only based on statistics. I just want you to be careful Sophie and don’t get carried away before she does something terrible to you. Even of she doesn’t, it’s not bad to be cautious abi?” I said.

She looked at me long and hard, probably searching for truth in my eyes. I smiled at her with reassurance and then continued eating my food.

After sitting there for a while, staring into space, she stood up and began to ascend the stairs slowly. I looked at her as she began her journey up the flight of stairs. Then out of nowhere, I heard footsteps, Tola was probably coming down. I bent my head quickly and started fidgeting with my phone in a bid to avoid eye contact with her.

I heard her ask Sophie what the problem was.

“You look pale honey, talk to mummy, what is it?” Tola asked her.

“I’m fine mum. I just need to lie down for a bit.” Sophie said and continued climbing up.

Tola came down and walked past me. I was sure she took a long hard look at me before walking away. She stopped midway and called.

Someone answered from the kitchen and ran out almost immediately to meet her.

“Make me a pineapple and watermelon smoothie.”

“Hold on.” Tola called her back.

Tola turned to me and asked if I wanted a smoothie too. I replied in the negative. Before they will smoothie to send me packing from the house.

“Alright. Make a glass for Tolu too and take it to her upstairs. She’s not feeling very well.” She instructed Anjola.

Tola proceeded to the living room.

I stood up almost immediately and made to go upstairs. I was too angry with the woman to stay in the same are with her. I looked at the food I had in my plate one last time, sad to leave it because of Tola. Then something serious struck me and I wasn’t sure of what to do next.

32 Comments on The Lagos Side Chick- S3E4